An old man and woman were both residents at a very nice nursing home. Each day the two would meet for lunch in the dining hall, talk about the old days, laugh, and  enjoy each other’s company. After lunch, the two would stroll the grounds and eventually end up on “their bench” secluded by bushes and trees.

The old man would stroke the old woman’s hair, kiss her, etc. And, as usual, he would always suggest that she… touch his manhood. The old woman would always reply, “Oh no! I couldn’t do that. It just wouldn’t be proper!”

One day, the old woman seated herself in the dining room and waited, and waited. The old man didn’t show up. She thought was, “He must have gotten confused and went out to the bench first.” She decided to walk to their private spot.

As she approached, she saw him sitting with another woman.

The next day, she decided to confront the old geezer. While angry and hurt, she told the old man what she had seen and added, “I thought I meant something to you. I thought we were a couple. And besides, what does she have that I don’t?”

The old man simply shrugged his shoulders and replied, “Parkinson’s.” 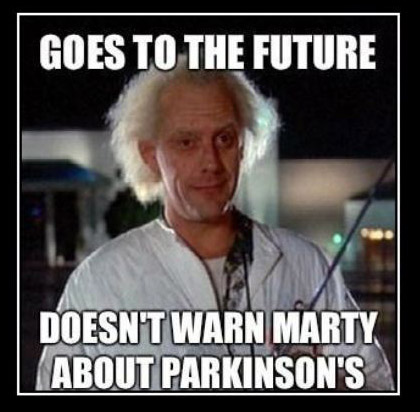 24 thoughts on “Back to the Future..and a bad joke”

Please learn about Transverse Myelitis. Help me. Help others

This work is licensed under a Creative Commons Attribution-NonCommercial-ShareAlike 3.0 Unported License.