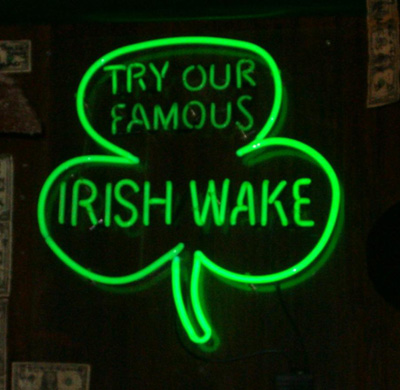 In case you’re not Irish, Celtic or just crawling out from behind a rock (Hi Jesus!) here’s a short definition of a Wake:
A ‘watching over’ of the deceased.

In Irish households it was customary to hold these parties with the body of the dead present. These days, not so much. If you live in New Orleans, think of the Jazz funerals. It’s a party!
But a party to honor and remember a loved one.

Fear and bereavement go away for a while. You’re thinking of someone else, that you loved, instead of your own problems.

For some sad reason I’ve attended two Wakes in the last two months.
One for Margaret ‘Juanita’  Harding and one for Gus.

Saturday night was Juanita’s Wake. My boyfriend’s mother.
She has been sick for a long time and died in her sleep Thursday night.

As can be expected Perry and I have been staying in since then. Trying to keep busy, awaiting the formal Memorial Service.

Out of nowhere we get a call Saturday afternoon from several of Perry’s childhood friends. They will be at the house in 10 minutes. We are going to have a wake for Juanita. Beginning at the Irish pub around the corner from the house.

We start our Celebration of Death!

When my father died my younger sister and step-mother held a ‘Celebration of Life.’
I almost threw up a little bit in my mouth just writing that.

My dad, dark humored (as in black humor, not no humor) and a recovered alcoholic for 25 years would have been appalled. He would have dug seeing all of the people he touched, and heard the kind words, but the whole ‘Celebration of Life’ thing –with no booze given our Irish heritage- probably made him shake his ass in laughter, even in the morgue. Especially sober.

Anyway, we proceeded to give our love and honor to Juanita and cheer to Perry.

We hoist the first Scotch at Ceol. This is the premier place to begin ANY Irish Wake in Reno. The Scotch selection is outstanding. Juanita was blessed with shots of Lagavulin 16 year old (smoky and the best of the night), followed by Laphroaig 10 year old , interspersed with U.K. beers from Smithwicks to Harp.

Do NOT stop here unless you’re already plowed and on your way home from the formal wake. We walked in at 5:30 and it was, er, dead. No Irish beers except for Guinness but they did have two decent Irish Whiskeys. One was chosen, more beers poured and kept the toasts coming. Then left. Dive bar. And not in the good way. I lived in NYC and know a good Irish dive when I see one. The one redeeming feature: the bar’s owner also owns the Bunny Ranch brothel, and so the bar matches could make for a good keepsake. Lots of boobies.

Once again: Not recommended for an elderly woman’s Wake.

Up the street to Ryan’s Saloon. One of the oldest Irish bars in Reno. By this time we had attracted more revelers. Much like a Jazz procession.

In fact after much hard work we managed to find ‘I’m too Sexy’ by right Said Fred on the juke box. Now THIS would have brought a smile to Juanita’s lips.

We had a table of well-wishers, many whom had known Juanita and many who had never met her in life, but came to know her in death.

Bar food was had by all, Scott the designated driver got everyone home safely, and it was truly a wonderful evening.

We would have hit Rapscallion’s given more time. Miss R gives this Irish Reno staple a high rating as well.

Juanita had a terrible past few years, but everyone who ever met her adored here. Last night we brought her back to life. And hopefully a little more life to the son that she left behind.

Thankfully Gus went before Juanita. Gus was the hero companion dog of some friends. His owner’s Karen and Jeff held the Wake at St. James Infirmary.
Highly recommended for a beloved companion animal or departed discerning beer lover. Juanita would have enjoyed Gus if they’d met.

So if you lose a loved one, want to send them off right, and wind up in Reno then I hope that this little tour can help.  And raise a glass to Juanita tonight.

May we all come to peaceful ends

And leave our debts unto our friends.

Please learn about Transverse Myelitis. Help me. Help others

This work is licensed under a Creative Commons Attribution-NonCommercial-ShareAlike 3.0 Unported License.